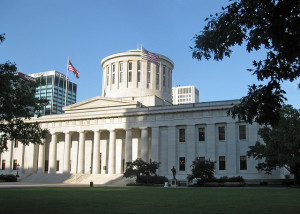 After over a year of contemplation, feedback, edits and advising, yesterday can only be described as a landmark for veterans’ and fraternal groups in the state of Ohio.

Representative Rick Perales (R – Beavercreek) introduced House Bill 325 last night in the Ohio House of Representatives, asking for the Ohio Legislation to clarify the rules for charitable gaming in the state, and to continue the charitable efforts of veterans and fraternal organizations.

To date, those charitable efforts have raised over $5,000,000 for charities in under two years.

Rep. Perales, a 15-year veteran of the United States Air Force, knows clarifying the laws in Ohio is a dramatic step in continuing the charitable efforts of Ohio’s veterans’ and fraternal organizations.

“This legislation (House Bill 325) is essential to helping veterans and fraternal organizations continue the good works made possible by the video raffle program in recent years,” said Rep. Perales. “It’s very unfortunate that these programs have been put in jeopardy. It’s time that the General Assembly moves forward and shows its support for those who have served their country so valiantly.”

“I am very fortunate to have many current military members and veterans in my home area and I have seen firsthand what this program accomplishes,” Rep. Perales said. “Homeless veterans have been sheltered, struggling families have received food donations and the list goes on. I am sure if my colleagues check with charities in their areas, they will hear the same stories and see the same results.”

The full statement from Rep. Perales’s office can be found by clicking here.

Stay tuned to the OVFCC Website and Blog for the most up to date information, as H.B. 325 moves through the legislature.

The Intelligencer: “Give Veterans a Break in Ohio”

In light of the recent comments of Ohio Attorney General Mike DeWine, at least one newspaper thinks that Mr. DeWine and the Ohio Legislature should give veterans’ and fraternal organizations a fair way to raise funds for their organizations and the over 400 charities they support.

Appearing in the editorial section of the October 21st edition, the Intelligencer Wheeling News-Register feels the time has come for legislation that helps so many to be part of the legislative agenda for the Ohio State House of Representatives and the Senate.

Most of the proceeds appear to go to worthy causes. Some veterans’ organizations may need money from the machines merely to stay afloat. And during the past two years, the veterans’ groups have donated $5.4 million in raffle machine proceeds to various charities…

Legislators should consider allowing the electronic raffle machines, with tight limits intended to benefit only legitimate veterans’ and fraternal organizations.

To date, the OVFCC electronic raffle program has raised over $5.5 million for charity, working with the Attorney General and the Ohio Legislature to create the most transparent and fair system of its kind.  Recently, over 200 members of state-wide veteran and fraternal organizations gathered at the Ohio Statehouse in support of the OVFCC program, hoping to encourage legislators to take up the matter.

As Ohio state legislators prepare to begin the 2013 Fall Session, the OVFCC calls on its members to stand in support of one another on Wednesday, October 16th at 11:00am at the Ohio Statehouse Building.

The OVFCC offers the only form of gaming that benefits charities and we deserve the right to continue to conduct video gaming.  We can’t afford to wait any longer!  Free parking and shuttle service will be offered starting at 10:00am from Veterans’ Memorial at 300 West Broad Street in Downtown Columbus.

For more information on this important, one-time event, please contact Bill Seagraves at bseagraves@ovfcc.org, or at 614.946.4099.

More details about the event can be viewed on the attached PDF.