Happy Holidays From the OVFCC

Happy Holidays from the OVFCC!

On behalf of the Ohio Veterans and Fraternal Charitable Coalition, its members, partners and supporters, and from all vets’ and fraternal organization across Ohio and around the world, we wish you a happy holiday from our family to yours.

It has been a very big year for the OVFCC, and we’re looking forward to a happy and prosperous new year in 2014.

So from all of us to all of you, Happy Holidays!

WCMH NBC-TV in Columbus, Ohio recently featured a story on the recent civil case, filed on behalf of the Ohio Veterans and Fraternal Charitable Coalition and Ohio AmVets, to allow electronic video raffles to continue operations.  The case will allow OVFCC members to turn their machines back on without fear of penalty from the Ohio Attorney General until the Ohio Legislature has time to consider pending legislation on the matter.

The Ohio Legislature, which returns to session in January, is considering HB 325, legislation proposed by Representative Rick Perales, that would clarify current law concerning how veterans and fraternal organizations support local and national charities.  To date, the OVFCC Electronic Video Raffle Program has raised over $6 million for charities in under two years.  The program also helps keep local veterans and fraternal posts open to their membership in these tough financial times.

For more information, stay tuned to the OVFCC blog, your source for information about SB 325.

Last week, after the legislature adjourned for the remainder of 2013, we abided by the Attorney General’s request to shut down the terminals since no legislation would be considered until the legislature returns in January.  While we understand that the Attorney General’s office was simply doing its job, this was costing our charities over $15,000 per day at a time of year when charitable requests are at their peak.  We could not stand by and do nothing when we believe the video raffle system we are operating is already legal under Ohio law.

So we took the matter to court where we received a temporary restraining order against the State of Ohio while the court considers the case.  This will allow our posts and lodges to continue raising charitable funds through the centralized video raffle system.  Every single dollar raised by the raffle program is tracked electronically in real time and accounted for on our transparent reporting system.  Since its inception, our charitable video raffle program has raised over $6 million for charities.

Our first priority has and will remain to encourage the legislature to pass HB 325 (Rep. Rick Perales), which would clarify state law with regard to the legality of video forms of bingo conducted for charity.  Under Ohio law, our organizations are already permitted to play various forms of charitable bingo in order to raise funds to support our post/lodges and local 501c3 charities, with the net revenue being split 50/50.  HB 325 would simply clarify that we are allowed to play these same games in a more entertaining video format.  The bill would also keep regulatory authority over charitable video bingo with the Attorney General.

We are hopeful that soon after the House returns in January, HB 325 will be scheduled for sponsor testimony in the Policy and Legislative Oversight Committee.  In the meantime, today’s TRO will allow our organizations to continue to raise funds to support their posts/lodges and their designated charities.

The Ohio Lottery Commission continues to offer its video gaming terminals to our organizations.  But as we’ve said in the past, the state commanders and leaders of our member organizations have unanimously decided to discourage posts and lodges from signing contracts with the Lottery because of serious concerns we have with the program.  Click here to see the letter.  Some of those concerns are:

It’s unfortunate that the legislature has not taken action on this issue and we remain hopeful that legislation will be passed in early 2014.  This has put us in a position where we had no other option but to go to court.  Otherwise our organizations and charities would lose millions of dollars in vital funding.

We would greatly appreciate support for HB 325, which would resolve this situation through sound policy rather than a court battle.

OVFCC Members Give Trees for Troops 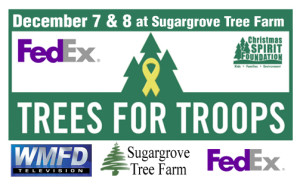 On December 7th and 8th, VFW and American Legion Posts in the Mansfield, Ohio area are following a recent trend in giving back during the holiday season.

Crestline, Ohio VFW Post 2920 and  Galion American Legion Post #243, proud members of the Ohio Veterans and Fraternal Charitable Coalition, are joining forces with WMFD-TV in Mansfield, along with FedEx, the Christmas SPIRIT Foundation and Sugargrove Tree Farm to try and fill a FedEx truck with Christmas trees to deliver to our troops at various Army, Navy, Marine and Air Force Bases.

The trees can be purchased and donated for just $25 at the Sugargrove Tree Farm, located in Ashland, Ohio.

The OVFCC supports Trees for Troops, the Sugargrove Tree Farm and Mansfield area OVFCC members as they serve military members all over the world this weekend!