Cincinnati will host the games July 17 – 22, with over 600 veterans from the United States and Great Britain competing in the events.

The games are organized by the U.S. Department of Veterans Affairs and the nonprofit Paralyzed Veterans of America. 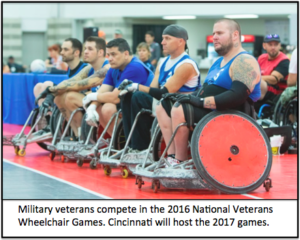 VFW of Ohio Charities’ support of the games has been made possible because of charitable video raffle games at VFW posts throughout Ohio.  Since the video raffle program began in 2011, over $26.5 million has been raised for charities like the wheelchair games.

“Prior to the video raffle, our revenues were declining year after year,” said Bill Seagraves, director of the VFW of Ohio Charities.  “With new technology and video forms of gaming, paper games are losing interest.  Video raffles have given new life to our organizations’ ability to raise funds to support themselves and local charities.”

But veterans and fraternal leaders are concerned that the video raffle program is in jeopardy.  In 2013, Attorney General Mike DeWine stated that the program was illegal and ordered it shut down.  The groups disagreed and quickly obtained a temporary restraining order allowing the program to proceed, pending a court decision, which is expected within weeks.  The groups are hopeful they will win their court case and continue to be able to raise vital funds from veterans and their members to support their posts and charities at no cost to taxpayers.