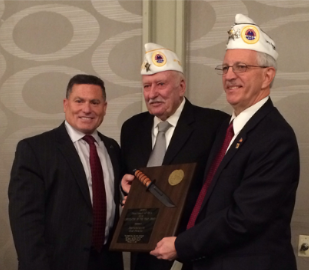 The AMVETS Department of Ohio presented its “Legislator of the Year Award” to Rep. Rick Perales (R-Beavercreek) on Saturday at its annual mid-winter conference. Representative Perales retired from the United States Air Force in 1997, his military career culminating as Commander of the 788th Civil Engineer Squadron at Wright Patterson Air Force Base.

“AMVETS appreciates Representative Perales’ dedication to giving our posts the ability to raise funds to support their operating costs and support local charities in their communities,” said Merle Pratt, AMVETS State Legislative Chairman and Past Department Commander and board member of the Ohio Veterans and Fraternal Charitable Coalition (OVFCC). “AMVETS’ goal is to improve the quality of life for veterans, their families, and the communities where they live. Rick Perales tried to help us with this mission, and we are grateful.”

In the coming Saturdays in May and early June, veterans and fraternal leaders will be offering informational sessions on charitable video gaming throughout Ohio. Leaders and legal counsel from the Ohio Veterans and Fraternal Charitable Coalition (OVFCC) will update post and lodge leaders on the OVFCC’s charitable video raffle program, as well as the Ohio Lottery’s new video gaming program. The sessions will offer information and answer questions on the legality, revenues, and differences between the two gaming programs.

All post and lodge leaders are encouraged to attend an event in their region in order to hear the latest on video gaming at our posts and lodges and to ask any questions they might have.

Below are the dates, times and locations:

Columbus, Ohio (April 24, 2014) – The Ohio Veterans and Fraternal Charitable Coalition (OVFCC) announced Thursday that its video raffle program has now raised over $8 million for Ohio charities. These funds directly benefit veterans posts, fraternal lodges and hundreds of local 501c3 charities, with 50% going to veteran’s posts/lodges and 50% going to local 501c3 charities in communities across Ohio.  In addition, a portion of the money raised by the OVFCC goes to fund veterans service officers who assist Ohio veterans in filing benefits claims with the Veterans Administration.  Last year these veterans service officers helped return over $50 million in federal funds to Ohio’s veterans in need.

Attorney General Mike DeWine asked that veterans and fraternal groups seek legislation to clarify the law regarding video forms of raffle.  But House Bill 325 (sponsored by Rep. Rick Perales) is stalled in the House Policy Committee in favor of a Lottery Commission gaming system that directs critical funds away from local charities and into state coffers and the Lottery’s Greek-based vendor Intralot.

Just this week, funds from the video raffle program were used to pay the funeral expenses for a Dayton area Air Force reservist who was recently murdered and whose son is still missing.  Click here to see Dayton television news story about how funds for initiatives like this are in jeopardy. Court order allows video raffle program to continue

Veterans and fraternal organizations have filed suit against the state and have been granted a temporary restraining order by the Franklin County courts, enabling posts and lodges to continue operating video raffles without interference from state agencies while the court considers the suit.

Dayton’s NBC Affiliate, WDTN, already covered the VFW of Ohio Charities’ recent decision to fund the funeral of Nichelle McKnight, who was supposedly murdered within the last month.

Now, WDTN’s Jackie Sprague reports that the source for that funding, raised mostly through the OVFCC’s electronic raffle program, could be at risk if lawmakers continue to oppose and House Bill 325.

The goal of the OVFCC is to support charities and communities by supporting veterans and fraternal groups across the state.  Without the OVFCC, the VFW of Ohio Charities might not have had the funds available to cover the funeral and burial costs for one of their own.  For reasons like this, and for many, many others, HB 325, the bill that clarifies existing law with regard to charitable bingo in the state of Ohio, must be passed by the Ohio House and Senate, and then signed into law by Ohio Governor John Kasich. 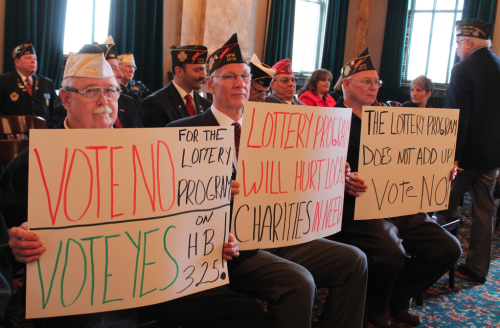 Vets at the Controlling Board Meeting (via @ohiocapitalblog)

In an unsurprising move on the part of the Ohio State Controlling Board, the Ohio Lottery was granted a budget expansion of $22.5 million to purchase 1,200 “next generation” electronic gaming machines from Greek manufacturer Intralot.  The Controlling Board, a bipartisan group, voted unanimously to approve the expansion, and give the lottery the chance to corner the market, and expand legalized gambling to include Ohio veterans and fraternal posts and lodges statewide.

While the Controlling Board debated the issue before ultimately rubber-stamping the budget expansion, veterans and members of local fraternal and sports clubs sat in on the meeting, hoping that the legislators on the Board would voice the opinion of vets, fraternals and local charities that have emphatically opposed the lottery’s plan in favor of other solutions, such as Ohio House Bill 325.

If for no other reason, the Controlling Board’s decision comes without resolution of pending legal actions, or further debate and testimony over the constitutionality of the Lottery’s program, or the effectiveness of other programs that benefit more than simply K-12 education, which which is the only beneficiary of the lottery program.  From the Dispatch:

Suzette Price, American Legion of Ohio service director, said after the vote that the Controlling Board “acted prematurely” by approving the lottery plan before a decision is rendered in the court case.

“They are forcing us to take an option we’re not comfortable with taking,” she said.

Sen. Tom Sawyer, D-Akron, a Controlling Board member, questioned the expansion of gambling without “the opportunity to hold hearings and call witnesses.” He said going through the Controlling Board — an approach Gov. John Kasich used successfully in expanding the state’s Medicaid program — “is a poor substitute for legislative action.”

Ohio House Bill 325, unlike the Controlling Board workaround, would clarify current law statewide after testimony and debate, and would allow posts and lodges to give money to all charities, including and certainly not limited to statewide K-12 education.

The Executive Director of the Children’s Developmental Center in Amherst, Ohio recently sent a letter to the State Controlling Board opposing the Ohio Lottery’s plan because it only supports education in the state of Ohio, and not other important charities.  Without the OVFCC program and Ohio House Bill 325, the Center may very well cease operations.

The Children’s Developmental Center is just one of many nonprofits that benefited from private clubs such as the Veterans and Elks that raised thousands of dollars for programs for special needs children, veterans, the hungry, the poor, and countless others that depend on the generosity of the members to help them serve their mission.  The Children’s Developmental Center provides much needed therapy for children to help them prepare themselves for school, and without programs such as ours, these children may not receive the much needed therapy they need because the programs are losing funding from just about everywhere.

United Way is de-funding all individual programs in Lorain County by 2015.  Medicaid has reduced therapy reimbursement for children by 50% starting January 2014.  Private health insurance companies continue to increase co-pays and deductibles while at the same time reducing and limiting the services they will cover.  Families are being asked to ‘share’  the cost of health care at the expense of being able to afford it!

The dollars being raised by these private clubs going to the 501©3’s in Ohio have been a godsend.  With the emergence of the “machines”, the amount of money being generated for donation has substantially increased, and had provided the Children’s Developmental Center, not with additional funds, but dollars that were helping to meet the ongoing cuts being received.  Now, with the elimination of yet another stream of income, more people who receive help from nonprofits will be told, “Sorry, we don’t have the funding to help you!”.

The Lottery’s focus is to help education.  Well and good, but there are hundreds of nonprofits that help the individuals before, during, and after they are in school.  Please allow these private clubs to continue to provide a source of entertainment to their members while at the same time creating a funding stream for nonprofits that will allow them to help the people they have identified.

Thank you for your time and consideration,

Helping veterans and fraternal groups is the mission of the OVFCC, but almost as important is helping raise funds for the different charitable organizations supported by veterans and fraternal groups in Ohio.  While the Lottery’s plan will certainly benefit the worthy cause of education, it might do so at the expense of schools, hospitals, youth organizations and some of the other 400-plus charities that receive funds as a result of the OVFCC program. 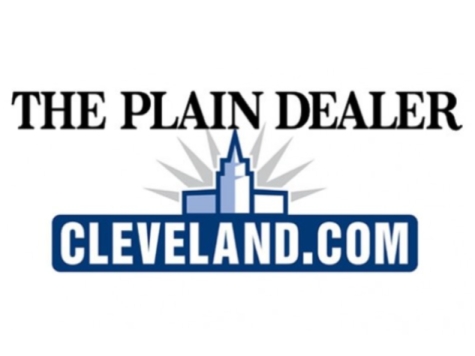 In an article published today in the Cleveland Plain Dealer, it was revealed that the Ohio Lottery will ask the state’s Controlling Board to adjust Lottery spending in order to purchase so-called “next generation” gaming consoles for sale to veterans and fraternal groups.  While the Controlling Board is expected to OK that increase, the next steps for every party involved grows increasingly cloudy in the eyes of many.

The lottery’s proposed machines have been vehemently opposed by many veterans and fraternal groups, and categorically opposed by the Ohio Veterans and Fraternal Charitable Coalition (OVFCC) due to the fact that the charitable spilt between the parties will give little help to veterans and fraternal organizations struggling to keep their doors open in these tough economic times.  Complicating the matter is the opposition from Ohio Attorney General Mike DeWine, historically an advocate and supporter of veterans, who deems the current machines in violation of Ohio law.

That’s where things start to get cloudy.

Despite the Lottery’s proposal, and the Attorney General’s stance on machines, veterans and fraternal groups are in favor of keeping the current OVFCC machines in their lodges and post locations.  So much so that the groups successfully sued DeWine to keep the status quo.  From the Plain Dealer

DeWine contends that the electronic raffle machines currently used at veterans posts and fraternal lodges operate like illegal slot machines. Last fall, he ordered the veterans and fraternal groups to turn off the machines or face prosecution, a sticky proposition for a veterans friendly politician seeking re-election.

While the Ohio House of Representatives continues debate on Ohio House Bill 325, a bill clarifying current charitable gaming law, many OVFCC members will continue to use the machines that former Justice Douglas has deemed to be “clearly not ‘strictly prohibited'”.

Stay tuned to the OVFCC website and blog for updates on where the story goes from here.