Columbus, Ohio (January 11, 2017) – Ohio charities have benefited from over $25 million in revenue since 2011 thanks to a video raffle program implemented by veterans and fraternal organizations.

The Ohio Veterans and Fraternal Charitable Coalition (OVFCC) announced this week that its video raffle program has reached a major milestone by hitting the $25 million mark in funds raised for charity.  They raised over $7,250,000 in 2016 alone.

“Our financial support of local charities is vital to their mission,” said OVFCC president Bill Seagraves.  “We are honored to be able to help our communities, and the video raffle program plays a major role in making this possible.”

For the Ohio State Aerie of the Fraternal Order of Eagles, OVFCC board member and past president Jim Donaldson says that the charitable electronic raffle project is important to an effort that is near and dear to his heart.

“My special charity has been the ‘the walking machine’ project at The Ohio State’s Wexner Medical Center and their affiliate, the NeuroRecovery Network,” Donaldson said.  “Much of the money in our Lew Reed Spinal Cord Injury Fund comes from Eagle clubs that participate in the charitable raffle program. During my five years on the OVFCC board, my other passion has become implementing a successful and accountable video raffle program. Since the OVFCC started that program, we have helped raise over $4 million dollars for Eagle charities and Aeries across the state. It’s a great tool for our clubs and the charities they support and continues to be a step in the right direction for our Aeries to embrace their charitable efforts, as well as pay some of our internal pressing needs.”

“This electronic raffle program is going to help purchase another body-weight support system that would double the Wexner Medical Center’s treatment capacity and reduce their patient waiting list,” said Donaldson.  “Isn’t that something? Just think of the impact this will have on future patients and their families.”

The electronic raffle program has caused other OVFCC member organizations to see a significant rise in revenue to their clubs and posts, allowing them to contribute back to their respective communities and charities in many ways.

But veterans and fraternal leaders are concerned that the video raffle program is in jeopardy.  In 2013, Attorney General Mike DeWine said that the program was illegal and ordered it shut down.  The groups disagreed and quickly obtained a temporary restraining order allowing the program to proceed, pending a court decision, which is expected within weeks.  The groups are hopeful they will win their court case and continue to be able to raise vital funds to support their posts and charities at no cost to taxpayers.

The OVFCC is the voice of more than 2.1 million members and their families who are active in more than 1,700 posts and clubs throughout the State of Ohio.  The OVFCC is an unincorporated association that was established in 2003 to achieve consensus and develop policy on various issues affecting Ohio veterans and fraternal organizations. Member organizations have input regarding charitable gaming as well as legislation, rules and regulations that impact veterans and fraternal organizations.

Columbus, Ohio (October 22, 2015) – Over 600 central Ohio military veterans in need received a hand up on Tuesday at the 18th annual Central Ohio Stand Down, a yearly event sponsored by the United States Department of Veterans Affairs with help from organizations like VFW of Ohio Charities and the Ohio Veterans and Fraternal Charitable Coalition (OVFCC). The event was held at the Greater Columbus Convention Center. 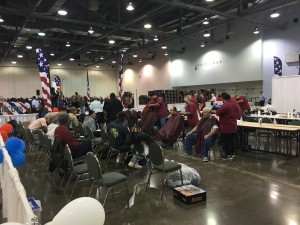 CLICK HERE To see the WCMH TV news story on the event.

VFW of Ohio Charities and the OVFCC participated in a substantial way by volunteering and distributing clothing items. They also help each year at other stand down events throughout Ohio, including Akron, Chillicothe and Dayton.

Funding to provide these critical items comes from the OVFCC charitable video raffle program, which has raised over $16 million for veterans & fraternal groups and their charities at no expense to taxpayers.

The video raffle program is currently operating under a temporary restraining order pending a court trial, which is set for 2016. Veterans and fraternal groups are hopeful they will win their court case and continue to be able to raise vital funds to support their posts and charities.

“It is a great honor to help veterans in need,” said VFW of Ohio Charities’ director Bill Seagraves. “The stand down event helps connect vets with important social services, and gets them the treatment and gear they need heading into the cold winter months. A lot is at stake with our lawsuit. We’d like to be able to keep doing these things for our veterans in the future.”

With the “tiny house” movement taking off in our country, Mr. Jordan just might be on to something.