Ohio Veterans to rally in support of electronic charitable gaming

Columbus, Ohio (February 15, 2018) – VFW of Ohio Charities has donated $4,000 to the families of two Westerville police officers who were slain in the line of duty this past Saturday while responding to a 911 call.

“This is a tragic loss for the officers’ families, the Westerville community and our nation,” said Bill Seagraves, Director of VFW of Ohio Charities.  “Like all first responders, officers Eric Joering and Anthony Morelli courageously put themselves in harm’s way every day to protect their community, and sadly they lost their lives.  We have a moral obligation to support these heroes’ families.”

The funds were donated through the CME Federal Credit Union and divided equally between each officer’s family.

VFW of Ohio Charities’ donation has been made possible through the use of a statewide charitable electronic raffle program operated by the Ohio Veterans and Fraternal Charitable Coalition (OVFCC) at posts and lodges throughout Ohio.  Since it began in 2011, the video raffle program has raised over $35 million for charities.

VFW to donate over $40,000 for hurricane relief

Columbus, Ohio (September 1, 2017) – VFW of Ohio Charities is teaming up with the national VFW in donating over $40,000 to help victims of Hurricane Harvey.

VFW of Ohio Charities will donate $20,000 and the national VFW will match that donation with another $20,000.  Additionally, local VFW posts throughout Ohio will be donating funds through the end of September.  The funds will be donated to the VFW Disaster Relief fund, and will be used to provide essential support to hurricane victims.

The storm has caused catastrophic flooding along much of the Texas coast and has displaced thousands of Texans from their homes.

“We need to rally around those whose lives have been devastated by this hurricane,” said VFW Department of Ohio Commander Robert Gianonne.  “This is a practical way for us to help people get their lives back on track.” 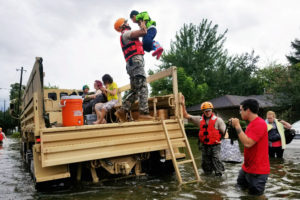 “In tragic times such as these, it’s important for us to help our fellow Americans who are in desperate need,” said Bill Seagraves, director of the VFW of Ohio Charities. “Our hope is that this donation will provide support for those who have been forced to evacuate their homes and are without essential items like food, clothing and shelter.”

VFW of Ohio Charities’ hurricane relief donation has been made possible because of charitable video raffle games at veterans and fraternal posts throughout Ohio.  Since the video raffle program began in 2011, over $30 million has been raised for charities.

“The video raffle program makes it possible for us to support hurricane victims,” said Seagraves.  “Without the program, we simply could not help these victims.  Prior to the video raffle, our revenues were declining year after year.  With new technology and video forms of gaming, paper games are losing interest.  Video raffles have given new life to our organizations’ ability to raise funds to support themselves and local charities.”

But veterans and fraternal leaders are concerned that the video raffle program is in jeopardy.  In 2013, Attorney General Mike DeWine said that the program was illegal and ordered it shut down.  The groups disagreed and quickly obtained a temporary restraining order allowing the program to proceed, pending a court decision, which is expected soon.  The groups are hopeful they will win their court case and continue to be able to raise vital funds to support their posts and charities at no cost to taxpayers.

Columbus, Ohio (November 30, 2015) – The Ohio Veterans and Fraternal Charitable Coalition (OVFCC) announced this week that its video raffle program has now raised over $17 million for Ohio charities along with its member posts and lodges.  The program began operating in October 2011.  For a regularly updated tally of charitable revenues, go to ovfcc.org.   The funds directly benefit veterans’ posts, fraternal lodges and hundreds of local 501(c)(3) charities; fifty percent of the revenue supports the posts and lodges and fifty percent supports local charities in communities across Ohio.

“Charitable funds raised through the video raffle program are vital to our communities and veterans in need,” said Suzette Price of the American Legion Department of Ohio.

“The recent Central Ohio Stand Down for homeless veterans is a great example of how these funds help those in need.  We provided medical treatment, help with local agencies, legal assistance, clothing, personal grooming, and a hot meal, all at no expense to taxpayers.”

Below is a sampling of just some of the important work veterans and fraternal organizations are doing to support local charitable causes that are so vital to local communities throughout Ohio. These initiatives have been made possible through funds raised by the video raffle program:

In a recent letter to all members of the Ohio State Aerie of the Fraternal Order of Eagles, new State President and Ohio Veterans and Fraternal Charitable Coalition Boardmember Jim Donaldson urged them to continue their support of the East Central Regional Lew Reed Spinal Cord Injury Fund.

“My special charity for my year as state president is the ‘the walking machine’ project at The Ohio State’s Wexner Medical Center and their affiliate, the NeuroRecovery Network,” Donaldson said.

The “walking machine”, more formally known as a Body-Weight Support System, is truly groundbreaking technology. The patient’s body is suspended over a treadmill using a harness system while specially trained therapists move their legs to simulate walking. This innovative training helps awaken nerve pathways by repetitively stimulating the muscles and nerves in the lower body.

So far the Eagles have raised over $30,000 for the new Body-Weight Support System with financial support continuing from clubs across the state that participate in the OVFCC’s charitable raffle program.

“Much of the money in our Lew Reed Spinal Cord Injury Fund comes from Eagle clubs that participate in the charitable raffle program. During my three years on the OVFCC Board, my other passion has become implementing a successful and accountable video raffle program. Since the OVFCC started that program, we have helped raise over $2.4 million dollars for Eagle charities and Aeries across the state. It’s a great tool for our clubs and the charities they support and is truly a step in the right direction for our Aerie’s to embrace their charitable efforts, as well as pay some of our internal pressing needs”.

“This electronic raffle program is going to help purchase another body-weight support system that would double the Wexner Medical Center’s treatment capacity and reduce their patient waiting list”, said Donaldson.

“Isn’t that something? Just think of the impact this will have on future patients and their families”.