The impacts of the coronavirus at the Veterans of Foreign Wars of Ohio Charities are significant.  Pryor to the pandemic, VFWOC was on track to break $6 million dollars per year for Charity. In January of 2020 we brought in $481, 492.50 and would have averaged ½ million per month this year.

Due to this loss we have had to pause our sponsorship programs to local charities all around the state of Ohio such as scouts, boys’ and girls’ clubs, schools, ROTC programs and First Responders to name a few. We also had to scale back on helping Veterans, their family members and those in their community who struggled to pay their bills due to injury or illness. We are still supporting food pantries and those who need assistance with medications and emergency medical supplies as well as purchasing PPE equipment for the VA hospitals and supplying them with food vouchers.

However, if our Posts and Clubs do not get to open soon that too will become a challenge.  The long-term effects of this pandemic will be catastrophic for some of our Posts and it may take us a very long time to get back to those numbers.

We are certain that the passing of HB 282 will speed up our recovery time. That is why it is imperative that we get resolution on it as soon as possible.  Thanks for all you are doing for the Veterans and Fraternal organizations!

Columbus, Ohio (January 11, 2017) – Ohio charities have benefited from over $25 million in revenue since 2011 thanks to a video raffle program implemented by veterans and fraternal organizations.

The Ohio Veterans and Fraternal Charitable Coalition (OVFCC) announced this week that its video raffle program has reached a major milestone by hitting the $25 million mark in funds raised for charity.  They raised over $7,250,000 in 2016 alone.

“Our financial support of local charities is vital to their mission,” said OVFCC president Bill Seagraves.  “We are honored to be able to help our communities, and the video raffle program plays a major role in making this possible.”

For the Ohio State Aerie of the Fraternal Order of Eagles, OVFCC board member and past president Jim Donaldson says that the charitable electronic raffle project is important to an effort that is near and dear to his heart.

“My special charity has been the ‘the walking machine’ project at The Ohio State’s Wexner Medical Center and their affiliate, the NeuroRecovery Network,” Donaldson said.  “Much of the money in our Lew Reed Spinal Cord Injury Fund comes from Eagle clubs that participate in the charitable raffle program. During my five years on the OVFCC board, my other passion has become implementing a successful and accountable video raffle program. Since the OVFCC started that program, we have helped raise over $4 million dollars for Eagle charities and Aeries across the state. It’s a great tool for our clubs and the charities they support and continues to be a step in the right direction for our Aeries to embrace their charitable efforts, as well as pay some of our internal pressing needs.”

“This electronic raffle program is going to help purchase another body-weight support system that would double the Wexner Medical Center’s treatment capacity and reduce their patient waiting list,” said Donaldson.  “Isn’t that something? Just think of the impact this will have on future patients and their families.”

The electronic raffle program has caused other OVFCC member organizations to see a significant rise in revenue to their clubs and posts, allowing them to contribute back to their respective communities and charities in many ways.

But veterans and fraternal leaders are concerned that the video raffle program is in jeopardy.  In 2013, Attorney General Mike DeWine said that the program was illegal and ordered it shut down.  The groups disagreed and quickly obtained a temporary restraining order allowing the program to proceed, pending a court decision, which is expected within weeks.  The groups are hopeful they will win their court case and continue to be able to raise vital funds to support their posts and charities at no cost to taxpayers.

The OVFCC is the voice of more than 2.1 million members and their families who are active in more than 1,700 posts and clubs throughout the State of Ohio.  The OVFCC is an unincorporated association that was established in 2003 to achieve consensus and develop policy on various issues affecting Ohio veterans and fraternal organizations. Member organizations have input regarding charitable gaming as well as legislation, rules and regulations that impact veterans and fraternal organizations.

Gertrude’s late husband Robert Trowbridge was an Army veteran, 37th Division where he served in the South Pacific during World War II.  Six of her family members also served in the military.  During the final years of his life, Mr. Trowbridge suffered from dementia and received outstanding care at the Veterans Home.   Gertrude wanted to volunteer to help the home in some way to show her appreciation, but living over 100 miles away made it difficult.  Then she learned the home needed bed coverings, so she put her quilting talents to work by making decorative, patriotic quilts for the home’s residents.

Although her husband passed away in 2011, Gertrude has continued making quilts.  To date, she has made nearly 300 quilts for the home, and she doesn’t plan on stopping anytime soon.  Her goal is to make at least 427 quilts, matching the total number of beds in the home. 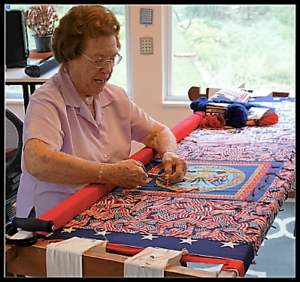 Each quilt is handmade on Gertrude’s traditional style quilting frame, taking several days to complete, working many hours each day.  Gertrude uses patriotic fabrics and yarns to brighten up the veterans’ rooms.

“This is my passion,” said Gertrude.  “It’s about all I do.  It’s a worthwhile way for me to help the veterans and show my appreciation for what they’ve done.  Even though some of the residents cannot talk, they speak to you with their eyes when you see their appreciation upon receiving a handmade quilt with their name on it.”

VFW of Ohio Charities learned about Gertrude’s service when she was profiled in a Columbus Dispatch article in June 2015.  The charity’s director Bill Seagraves reached out to Gertrude to help with the expenses of producing the quilts, which she had been paying for at her own expense.  This year VFW of Ohio Charities has provided $1,000 to Gertrude to help with her expenses and has committed to pay for the cost of materials and travel for as long as she’s willing to make the quilts.

“With all of the hard work and countless hours Gertrude dedicates to helping brighten the lives of Ohio’s veterans in need, providing funds to pay for her materials and expenses is the least we can do,” said Seagraves.

In 2013 Attorney General Mike DeWine felt that the charitable electronic raffle program was illegal and ordered it shut down.  But veterans and fraternal organizations disagreed and quickly obtained a temporary restraining order allowing the program to proceed, pending a court trial which is set for later this month.  The OVFCC and their charities are hopeful they will win their court case and continue to be able to raise vital funds from their members to support their posts and charities at no cost to taxpayers.

Hundreds of local charities throughout Ohio benefit from support

Columbus, Ohio (April 25, 2016) – The Ohio Veterans and Fraternal Charitable Coalition (OVFCC) announced this week that its video raffle program has reached a major milestone by hitting the $20 million mark in funds raised for charity.

“This is very exiting news for our organizations and the charities we support,” said Merle Pratt of the Ohio AMVETS and secretary of the OVFCC.  “Our charitable work is very important to our overall mission, and the video raffle proceeds are a critical part of our success.”

Attorney General Mike DeWine has said the program is illegal and ordered it shut down in 2013.  Veterans and fraternal organizations disagreed and quickly obtained a temporary restraining order allowing the program to proceed, pending a court trial, which is set for later this year.  The groups are hopeful they will win their court case and continue to be able to raise vital funds to support their posts and charities at no cost to taxpayers.   “It would be highly unfortunate if the charities we support were to lose vital funding because of state government leaders misinterpreting Ohio law,” said OVFCC president Bill Seagraves.  “No other form of gaming supports charities at this level and has such a positive impact on our communities.  We provide help for many who are at the end of their rope with no place else to turn.”

Nominations now being accepted for Ohio Veterans Hall of Fame

The Ohio Veterans Hall of Fame will be accepting nomination until June 30, 2015 for the 2015 class.

If you know of an Ohio veteran who you feel should be nominated, please visit the Ohio Veterans Hall of Fame website for more information.